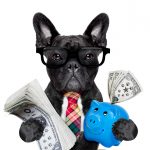 “I’m proud to be paying taxes in the United States. The only thing is, I could be just as proud for half the money.” — Arthur Godfrey

“The trouble with the profession of tax collecting is that 90% of its members give the rest a bad name.” — anonymous

“Day in and day out, your tax accountant can make or lose you more money than any single person in your life, with the possible exception of your kids.” — Harvey Mackay

“What’s the difference between a tax auditor and a rottweiler? A rottweiler eventually lets go.” — anonymous

“What is the difference between a taxidermist and a tax collector? The taxidermist takes only your skin.” –– Mark Twain

“People who complain about paying their income tax can be divided into two types: men and women.” — anonymous

“If Patrick Henry thought that taxation without representation was bad, he should see how bad it is with representation.” — Farmer’s Almanac

“For every tax problem there is a solution which is straightforward, uncomplicated-and wrong.” — anonymous

“Why does a slight tax increase cost you two hundred dollars and a substantial tax cut save you thirty cents?” — Peg Bracken

“The Taxpayer’s prayer: Oh Mighty Internal Revenue Service, who turneth the labor of man to ashes, we thank thee for the multitude of thy forms which thou hast set before us and for the infinite confusion of thy commandments, which mulitplyth the fortunes of lawyer and accountant alike.” — Russell Baker

“I owe the government $3,400 in taxes. So I sent them two hammers and a toilet seat.” — Michael McShane

“Unquestionably, there is progress. The average American now pays out twice as much in taxes as he formerly got in wages.” — Henry Louis Mencken (1880-1956)

“How can you tell when a tax auditor is trying to trap you into a confession? Answer: When his lips are moving.” — anonymous

“The hardest thing in the world to understand is the income tax.” -Albert Einstein

“The Government that robs Peter to pay Paul can always depend upon the support of Paul.” -George Bernard Shaw

The IRS sends out 8 billion pages of forms and instructions each year. Laid end to end, they would stretch 28 times around the earth.

Nearly 300,000 trees are cut down yearly to produce the paper for all the IRS forms and instructions.

American taxpayers spend over $200 billion and 5.4 billion hours working to comply with federal taxes each year, more than it takes to produce every car, truck, and van in the United States.

The amount of effort needed to calculate and pay federal income for individuals and businesses in the United States is the equivalent of a staff of 3 million people working full-time for a year.

The IRS employs 114,000 people — twice as many as the CIA and five times more than the FBI.

60% of taxpayers must hire a professional to get through their own return.

Taxes eat up 38.2% of the average family’s income; that’s more than for food, clothing and shelter combined.