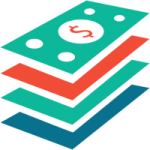 The most important factor for wealth-building is the steadiness with which you invest, year after year, starting right now.

Let’s say your neighbor has $100,000 invested in stocks and bonds, and he spends the earnings each month, keeping the principal intact. Meanwhile, you have saved very little. Do you think your neighbor is wealthier than you are? Not for long.

Five dollars isn’t much, but invested over time it can build a very comfortable retirement.

U.S. Savings bonds are as American as Fourth of July and Apple Pie. But despite their wholesome image, they may not be as good for you as other investments.

Years ago, EE bonds were king. Backed by the U.S., they paid more than you could earn at the bank, they were exempt from state income taxes, and the interest wasn’t taxed until you actually cashed the bond.

Over the past 20 years savings bonds grew at an average annual rate of 7.7%, while the S&P 500 stocks returned 14.5%. After taxes, your savings bond growth would barely have kept up with inflation, which averaged 5.3%. And don’t expect U.S. Savings bonds to earn anywhere close to that amount in the future: the rate dropped to a minimum rate of 4% in 1996. If you hold them for five years, you may earn somewhat more than that.

If you buy savings bonds, it’s important to understand how they work so you can determine the best time to redeem them. Bonds bought on or after May 1, 1995, will earn at the market rate set on May 1, until a new rate is set on November 1 of each year. And your bond will cease to earn interest when it reaches final maturity in 30 years. Interest is credited every six months to these newer bonds, so you won’t get interest for the period you hold it beyond those dates.

If your savings bond interest is credited on May 1 and November 1 each year, you will lose up to six months interest if you cash the bond before those dates. Be sure to examine your bond carefully before you redeem it to receive the maximum amount of interest.

1 thought on “Saving For Retirement On $5 A Day”