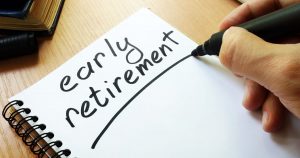 Early retirement is the dream. Think about how amazing it would be to cut the straight jacket that is your crazy, stressful 9 – 5 job. Imagine what it would be like to hang out at the beach in the middle of the day, have the time to cycle instead of drive to the grocery store, start writing that novel that’s been rattling around in your head for the past decade, or actually see your husband while you’re both awake!

You CAN retire early. Maybe not in your 30s or 40s unless you win the lottery or decide to live in a cave like a hermit, but retiring in your 50s is doable as long as you plan early, make smart financial choices, and are comfortable keeping that financial belt tight during your working years!

The key to early retirement isn’t rocket science, but just because the system is simple does not make it easy! The special formula goes like this: Massive Saving + Low Spending = Early Retirement.

Let’s assume that you will live to the ripe old age of 85. (The average lifespan of a U.S. woman is 81.2 years, but we’re giving you a buffer). If you were to retire at age 65, you would need enough money to cover all of your expenses for 20 years. Now, imagine that you retired at age 50. You’ll need to sock enough away to cover your expenses for 35 years, AND you’ll have lost out on 15 of your highest earning years of income.

That’s a pretty tall order, but you can do it if you save like a friend as early as possible. We aren’t talking about merely socking away the typical 15% that most financial experts suggest. No, you’ll need to hit 20% at the least, and 30 – 40% savings is probably closer to the mark. (You can Google retirement calculators to get a better idea of what you’ll need).

To save this much, you’ll have to drastically reduce your spending. That may mean making difficult choices even early in your life, like going to a public state college rather than an expensive private school. It could mean buying used cars, living in a tiny apartment, or skipping fancy vacations. Heck, it may even mean moving across the country to retire or even to an entirely different country where the cost of living is much more reasonable.

Saving and spending less is only the beginning of planning to retire early. Keep in mind that if you retire at age 50, you’ll need to cover your own health insurance until age 65 when you can apply for Medicare. Also, you’ll miss out on other corporate benefits, such as dental insurance, life insurance, and retirement contributions.

Speaking of retirement contributions, you may be able to start taking money out of your 401(k) plan, but only if you retire from your company after age 55. Otherwise, you’ll have to wait until age 59 and a half to make penalty-free withdrawals. While you can start taking Social Security payments at age 62, you’ll receive a reduced benefit if you take it early. If it’s possible, wait until age 66+ to receive your full benefit, or, better yet, wait until age 70 to receive an even higher benefit.

Retiring early isn’t easy, especially in our consumerist society, but it’s not impossible, even if you aren’t a millionaire as long as you are willing to put in the work for it. One great way to get started is to speak with a financial consultant or to start a local Money Club with like-minded people.

(Related Read: Check out this amazing story of a couple with 13 children who plan to retire early.)